Legionella bacteria, the etiologic agent of Legionnaire’s Disease, are a water-based organism which causes infection when the viable, aerosolized bacteria are inhaled. Many building water systems (including mains water supplies, cooling towers, potable hot and cold water systems, recirculating water humidifiers, and whirl pool spas and Jacuzzis) have been linked to Legionellosis.  The cause of the disease, a naturally occurring aquatic organism, is a gram negative, rod shaped bacteria called Legionella pneumophila.

The source of the bacteria in a domestic hot water system is normally the city water supply, with the bacteria present at low, usually undetectable concentrations. Legionella bacteria may be able to pass through a municipal water treatment works inside a protozoan, surviving the chlorination process. When conditions are more favorable, the Legionella emerges from the host organism and begins to multiply.  Aspiration of water containing the bacteria may also cause the disease.

Legionella can survive in a dormant, viable status for approximately two years.  Very low nutrient levels do not necessarily terminate viability.  Optimal growth occurs at approximately 36ºC; however, growth can occur between 20ºC and 40ºC.  Below 20ºC the bacteria is dormant though still viable; above 45ºC the bacteria will begin to perish.  Like fungal exposure, dose-response or exposure-disease values differ among receivers – no definitive TLV’s, PEL’s, IDLH values have been established.  Source concentrations of the bacteria and associated aerosol concentrations at breathing level are key evaluation factors. Therefore, ideally, Legionella bacteria should not be allowed to amplify in any system above the limit of detection.  The absence of detectable Legionella should not be considered as proof that Legionella does not exist – only that it was not detected.  Prevention, maintenance, monitoring, and response protocols should always be employed. 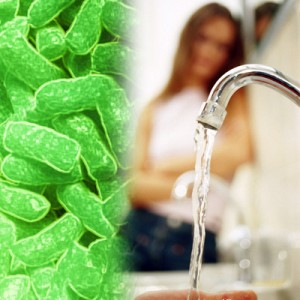 Outbreaks of Legionnaires’ disease receive significant media attention especially when a large number of people become ill or die. In contrast to highly publicized outbreaks, single infections with Legionella bacteria often go unnoticed. According to the Centers for Disease Control and Prevention (CDC), between 8,000 and 18,000 people are hospitalized with Legionnaires’ disease in the United States each year. Legionnaires’ disease is a legitimate public health concern as its fatality rate during an outbreak ranges from 5% to 30% in those who contract the disease. The immediate consequences for the building owner or manager faced with liability claims and negative publicity can be devastating and extremely costly. Many experts agree that proactively managing the risk of Legionella bacteria in cooling towers and water systems is more cost effective than responding to an outbreak retroactively.

We recommend building owners and hospitals establish a Legionella control and management program, including routine monitoring and testing, in areas where the risk of Legionella infection is high. Legionnaires’ disease is reportable in 48 of the 50 states in the United States (U.S.). An attending physician is required to inform the State Department of Health, which in turn forwards the information to the CDC.

Routine testing is recommended in buildings with a highly susceptible population or in structures with building related illness suspected due to Legionella.